Erdem Akılotu graduated the Department of Public Administration at Ankara University in 2001 and received his master’s degree in multi-national trade, e-commerce systems and technologies from Boston University in 2011. He is currently working on his Ph.D. in Management and Organization at Marmara University.

He assumed critical roles throughout his career and served as a senior official in many private companies and government agencies, including the Republic of Turkey Ministry of Customs and Trade. After achieving a long and successful track record, particularly in customs and foreign trade, Akılotu has joined Ekol as the Customs General Manager in April 2019. 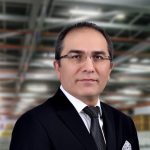