Levent Demir received his bachelor’s degree from the Department of Business Administration and International Relations in 1986, and later his Master’s degree from the Department of Press and Public Relations, both at Marmara University. Between 1986 and 2012, he took on roles as managing partner and consultant in various information technology companies. He joined Ekol Logistics in 2012, and was appointed as Procurement, Administration & Investment General Manager in 2014. 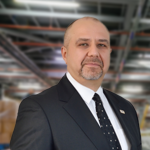